Abarth 595 Monster Energy: a limited series in partnership with Yamaha

Between the motorcycle manufacturer Yamaha and Abarth, it’s like something unavowable.

Since 2015, these two firms have been offering us the fruit of their passion. At the end of 2020, the two companies are announcing the birth of the Abarth 595 Monster Energy Yamaha. But beware, if you want it, you should know that only 2,000 units are produced. The Abarth 595 Monster Energy is, as you can see, a little “different”. Not because of what’s under the hood, since it keeps its turbocharged 4-cylinder engine with 165 horsepower, but because of its style. This 595 has literally been mixed with a YZR-M1 MotoGP 2020 from the Monster Energy Yamaha Team. That’s why it is dressed in a two-tone black and blue dress. In addition, she wears the “Monster Energy Yamaha MotoGP” logo on the lower side, just above the “595” logo. And just in case you haven’t figured it out, the yoghurt cup has the Monster “claw” on it, a sign of the fusion between Abarth and the drink brand. The dark colors are contrasted by the tar-gray finishes of the door handles and the front and rear diffusers. 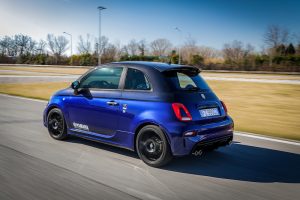 Inside, the two lovers offer special Abarth sport seats with blue finishes and the “Monster Energy Yamaha MotoGP” logo on the headrests. The blue trim stands out from the black dashboard. Reflecting the two-tone livery, while the numbered plate is placed on the central tunnel. The sports steering wheel has a flat spot that is particularly useful for track driving. The “Sport” button engages the entire cavalry, making the steering more incisive and the throttle response more peachy. The soundtrack is an integral part of every Abarth. The soundtrack is no exception with the original Record Monza active valve exhaust system. To stop the machine’s toning down, engineers added a braking system using 284 mm and 240 mm ventilated front and rear discs. Koni rear suspension is also standard.

Finally, they are equipped with Frequency Selective Damping System (FSD) technology to improve handling. The Uconnec 7″ HD system is also standard in the Yamaha Abarth 595 Monster Energy. This system integrates Abarth Telemetry. It allows drivers to measure their performance. Of course, the multimedia is compatible with Apple CarPlay and Google Android Auto.