The German car manufacturer Audi enjoys such a reputation that the prestigious brand of luxury cars definitely no longer needs any introduction. Indeed, the brand's vehicles are well known for their sportiness, elegance and outstanding performance. The Audi RS range is moreover the most notable example of this, with overpowered sports models that have nothing to be ashamed of when compared with the competition. Lovers of big cars, if you are looking for a car that combines quality, innovation and performance at the same time, the sporty range from Audi is just your ticket!

Audi Quattro: a look back at a unifying success

Let's go back in the footsteps of the legendary Audi Quattro, which has distinguished itself many times during numerous victories in racing championships. The history of the famous 4WD racing car dates back to 1980, when the German brand was still unknown to the general public. The first Coupé Quattro model became legendary when it won its first World Rally Championship in 1982.

In 1994, Audi unveiled its A4 Quattro, a sport sedan far ahead of its time, since it participated in various European championships in 1996 and won them all! The big advantage of its 4-wheel drive technology is that the car showed impeccable road holding while maintaining its road performance.

Since then, Audi has gradually built a reputation as a champion that has earned it great credibility with its customers. Indeed, the German manufacturer has kept this configuration on these most recent sports car models to this day, offering 4-wheel drive to its entire RS range. Thus the Audi R8, RS3, RS5, RS7 and even the TT RS are all Quattro models in addition to benefiting from a dynamism, a design and a competitiveness which break all records!

Audi Sport: much more than cars, it is a full-blown vision!

Today, although the brand's S and RS models are offered to thrill seekers, these models, designed primarily for motor racing, continue to be talked about in the championships! Indeed, Audi had no fewer than 13 victories at the 24 Hours of Le Mans – all thanks to its ever present cutting-edge innovation, state-of-the-art technologies and ever more efficient engines! Sportiness is therefore the hallmark of these prestigious cars, which justify an aggressive design and a level of performance that lives up to their reputation.

The Audi Sport customer racing sector also offers its customers who wish to drive a real racing car – like the models that compete in the championships – some versions that are derived from the famous R8: the R8 LMS GT3 and GT4!

Always with the aim of offering its demanding customers high-end services, Audi launched the range of Audi Performance parts in 2007, which allows any owner of a car of the brand to customise it as they wish and to considerably increase its performance on the road by adding equipment! Indeed, between lighter rims, more efficient brake pads, a rear spoiler and even aesthetic parts relating to the finishes of the passenger compartment, such as an Alcantara steering wheel or transmission paddles made of classy materials (polymer and carbon fibre), a large choice of customisation is offered to customers with the Audi Performance series. 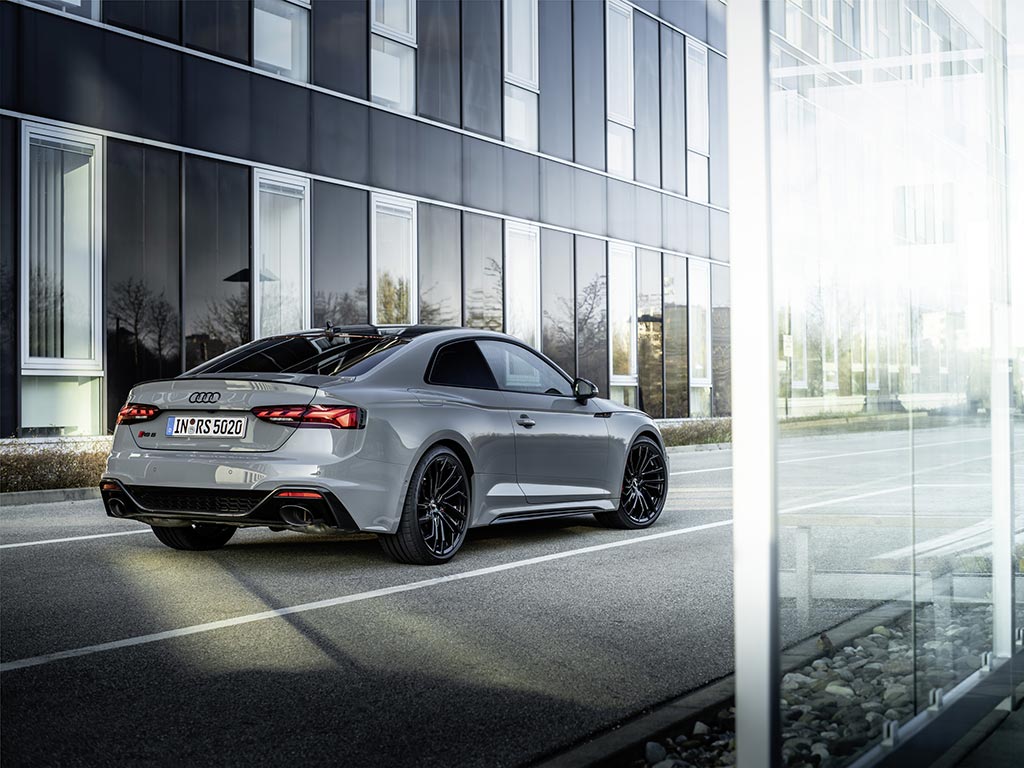 The latest Audi models
All our models 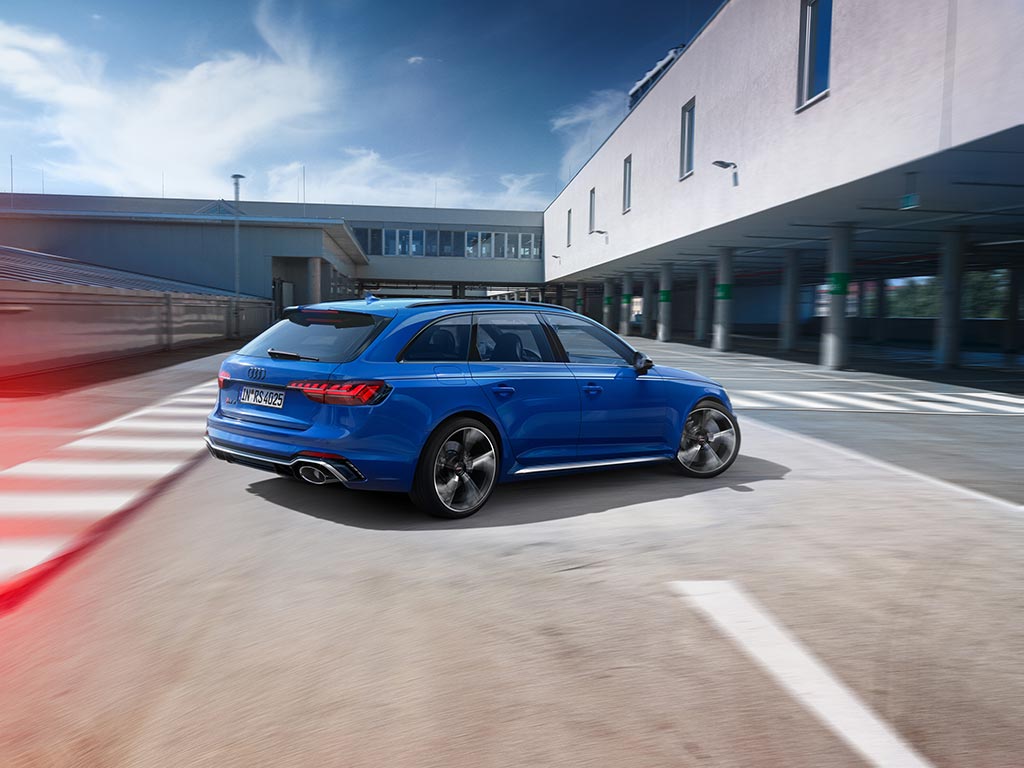 Audi RS: a sporty range adapted to all desires!

The 3 Series has two possible RS versions, the RS3 Sedan and the RS3 Sportback. These vehicles are powered by the same engine, with a 5-cylinder 2.5-litre unit developing 400 hp.

The RS4 Avant station wagon, on the other hand, has an aggressive look that exalts the power of its 2.9 TFSI 450 hp engine block. Don't underestimate this station wagon, the RS4 achieves 0 to 100 km/h in 4.1 seconds!

The Audi 5 Series is no exception to the RS variation! The uniquely styled and timeless coupe has an even sportier look thanks to its wide front air intakes and dual exhaust tailpipes. A 450 hp TFSI V6 engine block allows the beauty to hit 0-100 km/h in less than 4 seconds! The Audi RS5 is also available in a sedan version (Sportback).

Larger, you'll find the RS6 Avant station wagon. With its 560 hp V8 4.0 TFSI engine developing a phenomenal torque of 700 Nm, we thought we had achieved the perfect marriage of luxury and sportiness. That was without counting on the arrival of the Audi RS6 Avant Performance! Even more powerful, this model is one of the few wagon models exceeding 600 hp!

The TT-RS coupe also inherits an RS variant, for its coupe and roadster versions. With its five-cylinder turbocharged 400 hp engine, you're guaranteed to get a good dose of thrills at the wheel!

The SUVs also get their Audi RS version

The RSQ3 is the supercharged version of the family SUV of the same name, but make no mistake about it: underneath its relatively dirty looks lies a raging 400hp engine. Yet the trim makes it easy to tell the difference with its aerodynamic appendages, exclusive rims and braking system and a wide range of colors.

Finally, the RSQ8 tops off this sporty range: this SUV coupé carries no less than 600hp, just like the RS6, to catapult you safely to your destination. Once again, the look of this vehicle will hardly allow you to go unnoticed... 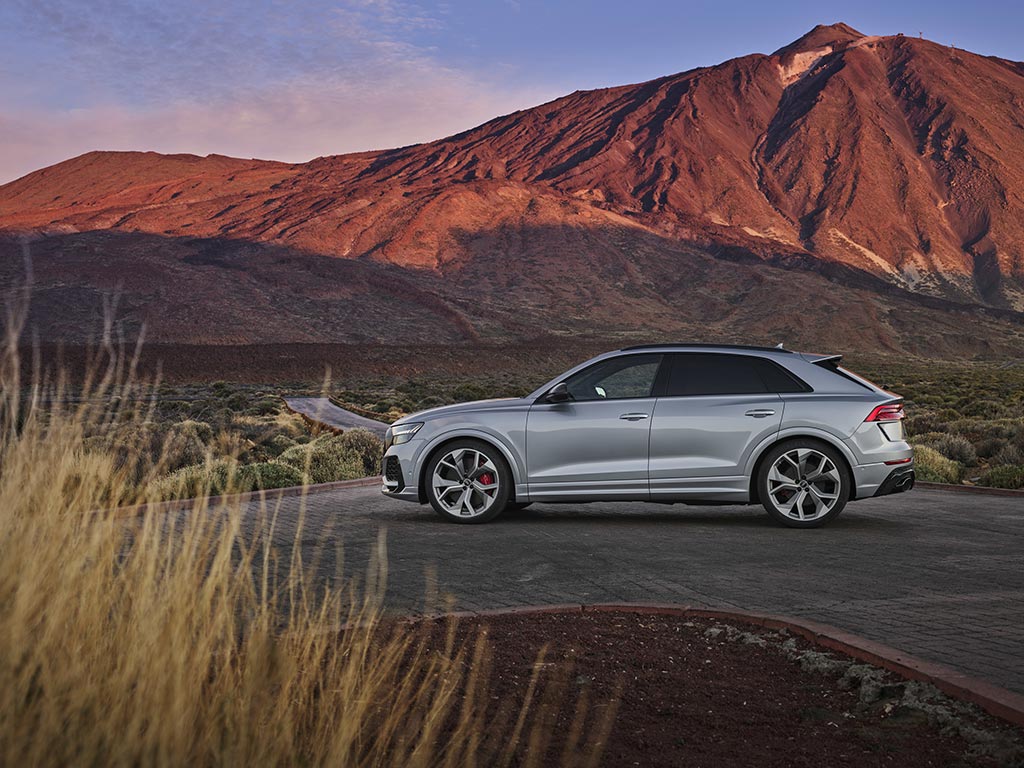